Two weeks before the first day of her senior year in high school, when most of her classmates were enjoying their final afternoons at the pool or going back-to-school shopping, Calleen Ferris was moving cows.

She had grown up on a dairy farm in Randolph, which both the cows and the family had outgrown. So her parents had purchased a larger property in Fairfax, and when it came time to move their 55 active milkers to the new place, everyone had to help.

“It was a four-hour round trip,” Calleen recalls. “Two hours up, two hours back. Over and over, from 5 am to 7 pm, until all the cows were home.”

But when the final cow was in the barn, Calleen didn’t stay; she turned around and headed back to Randolph to take care of their dozen or so heifers until they could be moved the following week. She made her final drive north to Fairfax on a Monday afternoon and started school the next day – where she was “the new kid” as a graduating senior.

“It was very weird,” recalls Calleen, who was not happy about the move. Her family had been a fixture in Randolph; her dad was born and raised on their farm, her mom came from another farm family in nearby Tunbridge, and the family lived next door to Calleen’s grandparents. “When we were at school, everyone would say, ‘I know your mom, I know your dad’” – not to mention that Calleen and her six younger siblings were a presence in themselves in the local school system.

So, on her first day of her final year of high school at a brand-new school, Calleen walked in with low expectations. “My mindset was, ‘I’m going to college next year, I don’t need to make any friends. I’m just going to study and go to class,’” she recalls.

But her experience ended up being much different. No longer defined by her family and her past, Calleen felt free to try new things. “It was the first time I didn’t have that small-town past surrounding me and defining me,” she says. Plus, as the oldest child in a large farm family, she had always had a tremendous amount of responsibility at home as soon as the school bell rang. “I didn’t do a lot outside of school. But finally, my senior year, I was able to be my own person, and I really took advantage of that. I had my ‘first year of college’ experience my senior year of high school.”

Calleen had known since middle school that she wanted to go to college. She started participating in the VSAC Talent Search program in seventh grade. “We did these career exercises, to start thinking about what we might be interested in doing,” Calleen recalls. “In my case, all the tests came back with teacher and social worker. That was definitely in my wheelhouse. I’d always worked with my siblings on their colors, on their shapes. I realized that teaching would be fun.”

VSAC Talent Search counselor Anne Kaplan worked with Calleen for six years. “Calleen faced significant financial barriers to college, as the daughter of a Vermont farm family with land assets but not a lot of income. But she really valued continuing her education, and that showed right from the start of her participation in the Talent Search Program as a 7th grader.”

Calleen says VSAC was instrumental in helping her go to college. “Growing up on a farm, I didn’t have the opportunity that most kids did to tour colleges, so I did that through VSAC. When we went, Anne prepped us for what to look for and what kinds of questions to ask. And she helped me understand financial aid and how that works. Especially coming from a dairy farm, those forms were so complicated.”

Perhaps more important than all of that, though, was the moral support. “I come from the bottom where you kind of have the odds stacked against you. But Anne never made us feel ‘less than’ because we came from poor families or we were first-gen,” Calleen reflects. “She always had faith that I could do it even when I didn’t have that faith myself. That was really powerful, to know that she was always going to be in my corner, and I could call her anytime.”

Calleen chose NVU Johnson because of its strong teaching program. Her four years there gave her many opportunities to hone her skills in actual classrooms, starting during her sophomore year. “I absolutely fell in love with it,” Calleen says. “I realized that I loved helping kids problem-solve. I specifically loved working one-on-one with the students who were a little rough around the edges and needed a little extra TLC.” Thanks to strong mentorship from Nick Lodge, a longtime 4th-grade teacher at Johnson Elementary School, Calleen realized that special education “was my jam.” 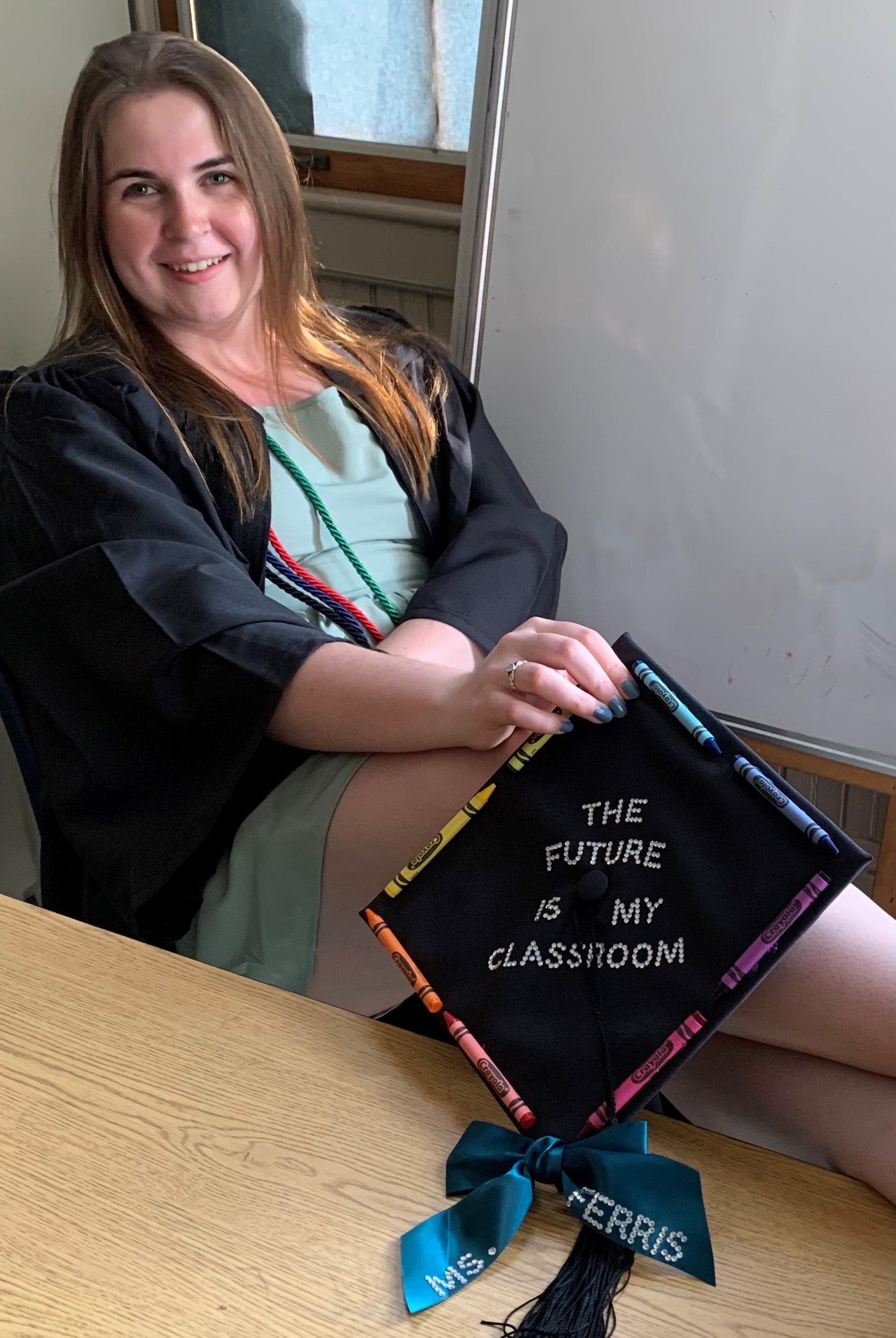 Calleen graduated from NVU Johnson in May with a degree in Inclusive Childhood Education, which means she’ll be licensed for K-8 special ed as well as general ed. This fall, she’ll start her first job at Sheldon Elementary School.

While both of her parents were always highly supportive of her college journey, they sometimes struggled with understanding the importance of social and extracurricular activities, Calleen says. That’s something that changed, not just for Calleen, but for her whole family, during her time at Johnson.

Calleen had joined the college volleyball team, and while she often sat on the bench – since she hadn’t played in high school, and particularly after she experienced a concussion that affected her hand-eye coordination and her depth perception – there was one particular game when Johnson was playing a weaker school and the coach could give her some court time.

“My whole family came to that game, even my dad,” Calleen recalls. “I got to play the majority of the game, and I was on fire. I had my best hitting percentage for a single game. It was really emotional. My team was super supportive, and my coach was so proud of me. My dad was able to see how much that meant to me, and how hard I had worked to be where I was.”

“That paved the way for all my siblings. Since that time, all of them have done athletics,” she says, proudly noting how her sister Hannah did Nordic skiing at BFA Fairfax and now attends Champlain College; that her sister Julia throws for the high school track team and participates in the theater program; and that her sister Lindsey is an incredible runner and skier and is thinking about pursuing an athletic scholarship for college. And both of her brothers play baseball. “That’s become a huge part of our lives now, athletics and extracurriculars,” Calleen says.

As she looks ahead to the start of her own career as a teacher, mentor and coach for the children who will be in her future classrooms, Calleen gives a lot of credit to the VSAC program for expanding her, and her family’s, opportunities and horizons.

“I worked as an admissions counselor for most of my time at Johnson. And I talked to so many in-state students who were part of VSAC. The fact that it has that good of a reputation and students are that proud to participate is so phenomenal. Lots of kids I worked with were first-gen, and for some of them, their parents were actually against their going to college. So they were doing it all on their own. And the reason they got there is because they have the Annes in their life, who said, ‘you can do this. You can break this cycle.’ It’s so powerful to have that. That’s why I want to stay in Vermont. It’s such a great place to be, with such a strong community.”

Tag:
Applying for Financial Aid
Applying to College
Searching for a College 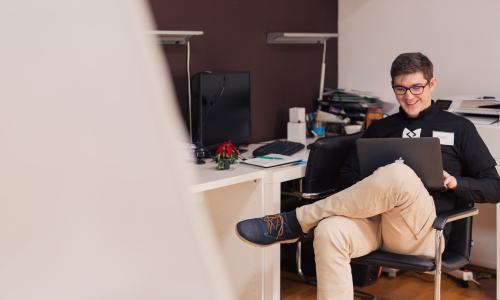 January 13, 2022
Time to Invest in Yourself with VSAC’s 802Opportunity Grant
Read More »