Charlie Wallace Finds Her Artistic Way with Help of VSAC 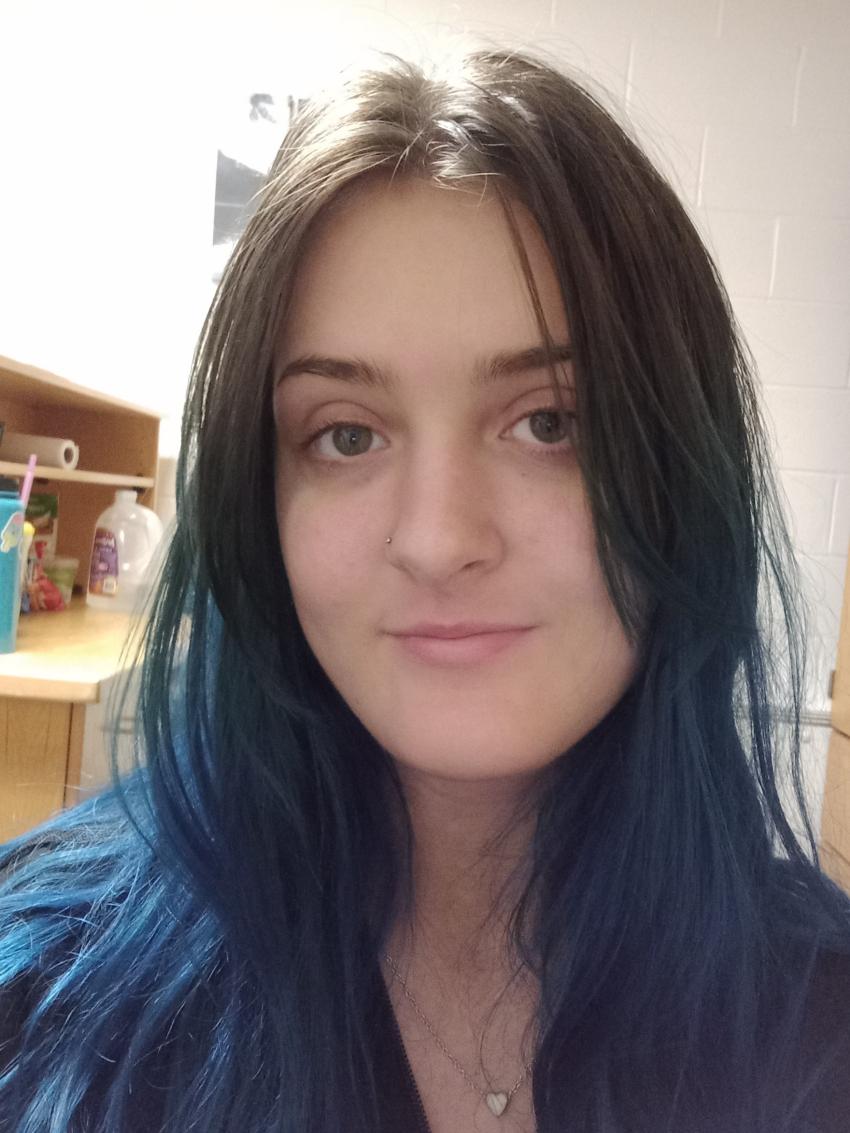 Twenty-year-old Charlie Wallace describes her art as “modern and eclectic. It’s totally random, and I love it. It gives me feeling.”

The soft-spoken young woman with the slight Southern accent and the blue streaks in her hair is now herself an eclectic mix of northern Vermont – where she moved, on her own, in 2020 – and Huntsville, Alabama, where she grew up “right in the middle” of a family of eight children. At times struggling to overcome past and more recent traumas, while also exuding a quiet, almost matter-of-fact self-confidence, Charlie is also an inspiring example of someone who is taking life as it comes and taking charge of her future.

A talented artist, Charlie has painted portraits of several of her siblings, combining a realistic style with creative textures, such as a splatter-paint background that she blew with a hair dryer. A personal favorite is a painting of a funny childhood memory: her brother Griffin pretending to eat a frog to tease their younger sister.

She has painted fantasy – such as angels and mermaids – as well as reality; one of her pieces is of a crying girl, reaching her arms out for someone to lift her up. According to Charlie, “I needed that in my life, and I didn’t always have it.”

In July 2020, partway through high school and at the height of the COVID-19 pandemic, Charlie Wallace moved from Huntsville, Alabama to Richford, Vermont, leaving family and friends behind. Seeking a fresh start and an escape from a difficult home life, Charlie asked her boyfriend at the time, who was moving back to Vermont with his family, if she could go too.

When she started school that fall at Richford Junior/Senior High School, she says “one of the first things that happened was that I was introduced to Michelle Legere,” the school’s VSAC outreach counselor with the GEAR UP program, which supports lower-income and first-generation middle and high school students who want to go on to college. “I gave her my background and we started working together.”

The only person in Charlie’s family who had finished college was her father, with whom she doesn’t have a good relationship. Her older brother Connor, who now works as a truck driver, told Charlie he always wished he’d finished his engineering degree. That comment led Charlie to view college as an opportunity to get herself to a better place in life.

“Her education is really important to her, and she’s worked really hard,” said RJSHS librarian Annette Goyne, who has been a mentor to Charlie since she arrived in Vermont.

One of Charlie’s first college-related activities was attending a college fair at St. Michael’s. “As I was looking around at all of the schools, I kept thinking to myself, it makes no sense for me to go somewhere else to get a college education when it’s already right in front of me,” she recalls. “I just needed to know how to afford it.”

VSAC’s Legere helped Charlie with her applications and financial aid paperwork. As an independent young adult who was not supported financially by her parents, there was lots to do. “There was so much paperwork, and I didn’t know where to start. Michelle taught me how to do everything, but also let me do it myself,” Charlie says. Legere helped her apply for scholarships and also offered feedback on Charlie’s writing, for application essays as well as for email correspondence. “She helped me sound more professional.”

With VSAC’s guidance and due to her own hard work and determination, Charlie was accepted at NVU Johnson, after distinguishing herself in many positive ways during her short time in Richford. At her high school graduation, Charlie won the Accepted and Valued Award, which recognizes a student who creates a culture of belonging and inclusion. And her neighbors may remember her as the talented and engaging face painter who delighted children at several local events.